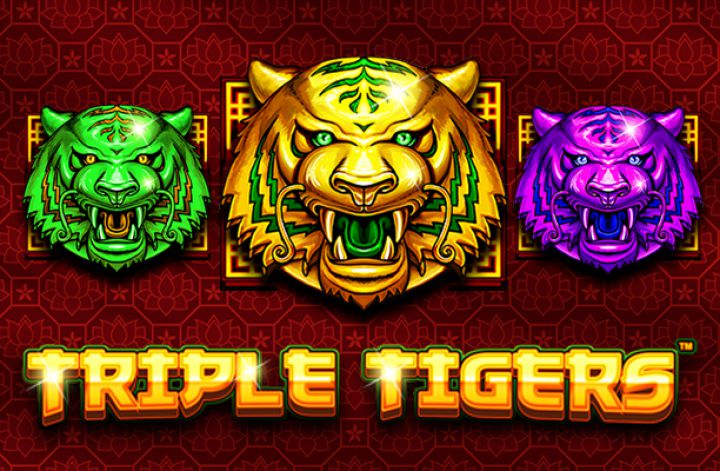 With Triple Tigers, Realtime Gaming transports you to the Orient. It’s a slot with a three-row grid and five reels, as well as 243 chances to win. At the time of writing this review, the RTP value was unknown, although the volatility level was moderate. It’s chock-full of symbols like Wilds and Scatters, as well as a variety of unique bonuses.

When it comes to awards, you have a chance to win the top prize of 2,000 times your stake. It’s also worth mentioning that this game has a betting range of $3 to $150. To get to the prizes, you’ll need to know the symbols on the reels as well as the perks and prizes that come with them.

This slot’s icons are specifically designed to fit the theme. When it comes to regulars, there are some who have a low value and those who have a high value. The elements are used with the four card suits to create distinct symbols in the first group. Then there’s a rat, a bull, and a tiger, as well as an orange flower, a purple lantern, and a rat, a bull, and a tiger. The animals all appear to be kung-fu masters. They’re also accompanied with unique emblems.

In this game, another tiger serves as the Wild symbol, which will assist you in forming winning combos by substituting for the conventional symbols on the reels. This isn’t just any Wild; it’s a bursting one. As a result, it will assist you in achieving substantial victories during the base game.

The Scatter sign, which is shaped like a golden coin, is the game’s second unique symbol. You’ll do better if you have more Scatters in a combination. To put it another way, if you obtain three of them, you’ll get 15 free games, four will get you 30 free games, and five will bring you 60 free games. You’ll also get a multiplier value that ranges from 2x to 5x the stake.

It’s also worth mentioning that during this feature, cascading wins are available. As a result, winning symbols will be removed and new ones will be added in their place, perhaps resulting in a string of wins.

Furthermore, this is the feature that will allow you to compete for the game’s top reward. Finally, 3 or more Scatters will retrigger this function.

The game’s theme is Oriental, and you’ll see numerous Oriental mansions and temples in the background. The set of reels is installed in the back of a temple. This game’s design is fantastic, and it can be played on mobile devices as well.

In search of adventure and treasure, Triple Tigers travels to the magical Orient. As you’ll see on the reels, tigers and other creatures will assist you in your mission. You’ll also get a Bursting Wild to liven up the base game, as well as a Scatter to bring you to the free games, which include cascading wins and multipliers. Overall, you have a fantastic slot title to look forward to.