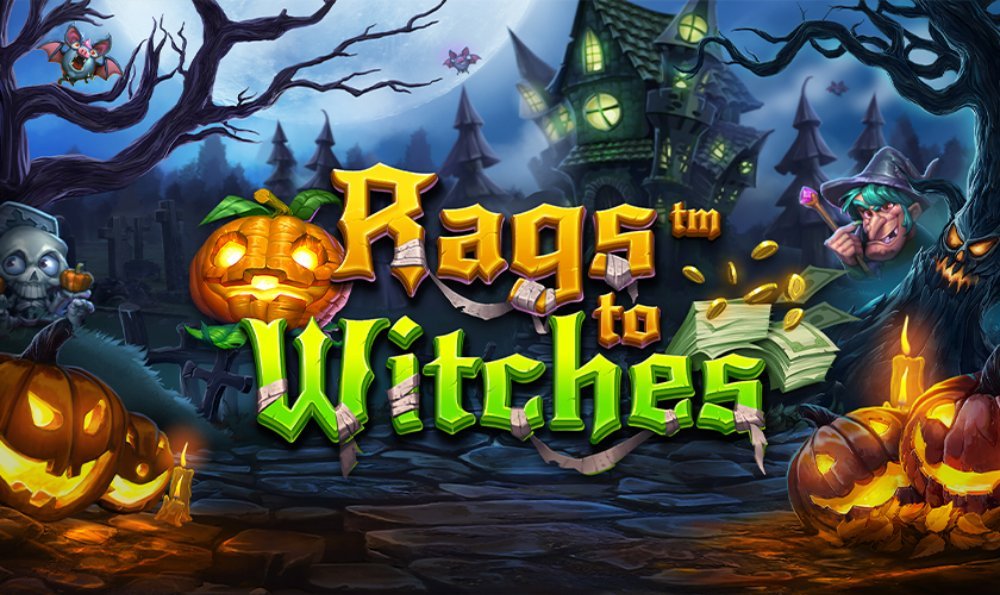 As part of Halloween, Betsoft created a scary-looking slot game called Rags to Witches. Even though they feature witches, skulls, and black cats, they didn’t really go all the way into the scary mode; it appears that funny/cartoon-style slots perform better.

30 paylines are available on its 5 reels. It appears feasible to win up to 15,000 times in a single spin with the appropriate combinations and using up to 30x multipliers during free spins. The progressive jackpots for the slot machine make it even better. In addition to those free spins, there are wilds and a randomly selected bonus game that starts the progressive jackpot.

You’re spending at least $0.30 for one round, but you can go a lot higher from there. Players are allowed to place bets up to $120.

The benefits seem to be quite favorable. Only 500x the bet would be paid if all of the top symbols appeared on the screen, but because the free spins offer additional multipliers, it appears that up to 15,000x may be won.

I was grateful for the existence of its progressive jackpots, the best of which was the Mega version. There are also Major, Minor, and Mini Jackpots available.

Features of the game Rags to Witches

On the second, third, or fourth reels, the Pumpkin Wild can appear. Since it can act as a stand-in for that symbol, all winning combinations created using its lines can benefit from it.

The primary element of the game’s standard mode is free spins. You get 10 free spins when 5 to 7 scatter symbols are visible. Additionally, for 4 to 7 scatters, you receive a prize worth 2x to 12x the bet.

There will be a growing multiplier that ranges from 1x to 10x, from 2x to 20x, or from 3x to 30x, depending on how many scatters must be triggered. The free spins cannot be retriggered in any way.

The bonus game that starts the progressive jackpot is random and only accessible during paid spins. The odds of acquiring the feature increase with bet size. The Mega Jackpot or one of the other progressive jackpots could be paid out.

For Halloween, they wanted a scary vibe, but the cartoony images make it seem less menacing. The main emblem is a witch, and there are also five bone-made Royals from 10 to A, a skull, a bat, a black cat, candy, candles, and a skull.

For those wishing to play anything for Halloween, Rags to Witches demo looks just as wonderful as any other Betsoft slot release. Even though the slot machine pays well on its own, the progressive jackpots increase its appeal. Overall, if you enjoy playing progressive jackpot slots and are ready to sacrifice some of the RTP for that aspect of it, this is a good alternative. The slot boasts a nice design, and the potential to pay big. It is a great game for low-stake gamers.