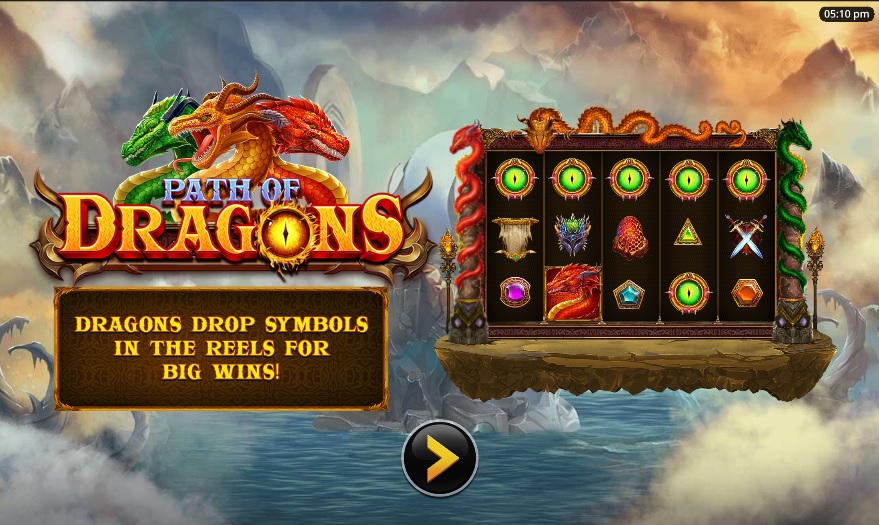 The fantasy genre’s Path of Dragons features a concept that has been used frequently in the past. This kind of narrative seems to be well liked by people, and this extends to the appeal of slot machines outside of simply good movies and video games. Swintt made the choice to exploit the dragon aspect in this particular situation.

They developed a system with five reels and twenty winning lines that you may use to try to win a jackpot worth up to 3,000 times ($120,000). At 96.07%, the RTP appears to be quite favorable, and the volatility is moderately high. The wild symbol, the Dragon scatters in their various forms, the Dragon Path mechanic and any potential multipliers that may result from it, and the free spins are just a few of the benefits that you acquire along the journey.

You can choose from a wide range of possible bet values, just as with any other slot machine. The lowest and highest stake amounts are $0.20 and $40 respectively.

$120,000 is still a respectable top jackpot, even though it doesn’t perform as well as some of the other large slots that are now available. If the maximum stake is used, the reward would be worth 3,000 times as much. It is more widely available than other slots, which are described as having medium to high volatility, but it also pays less than the best deals. Its RTP, at the announced level of 96.07%, has my satisfaction.

Features of the Path of Dragons Slot

The wild symbols in Path of Dragons are identified by the feature’s emblem, making them simple to locate. These can replace the other symbols but not the scatters of the dragon. They offer the highest payout of any symbol, up to 12.50 times the bet, for their own combinations.

Red, green, or orange-colored Dragon scatters come in three different varieties. When these appear on the reels, they advance in the direction of a gaming area corner, leaving a trail of high symbols of a single type in their wake (randomly selected). The crossing places of numerous trails will have wild symbols on them since you can get multiple trails at once. There is a multiplier available if you complete three trails in a single place.

You will receive eight free spins if there are three dragons on the reels at once. These can be activated again in the same way. It is not necessary for there to be three intersections between two dragons in order to add multipliers.

The slot machine’s design is quite striking, with pillars with dragon themes on either side of the reels and misty mountains in the distance. Six less desirable gemstones are delivered by the symbols in total. Flags, swords, masks, dragon eggs, dragon eyes, or the dragons falling as scatters are likely to catch your notice.

It has a good selection of unique features and is not the riskiest online game ever. Due to the popularity of the dragon theme among players, this position is guaranteed to draw some interest.