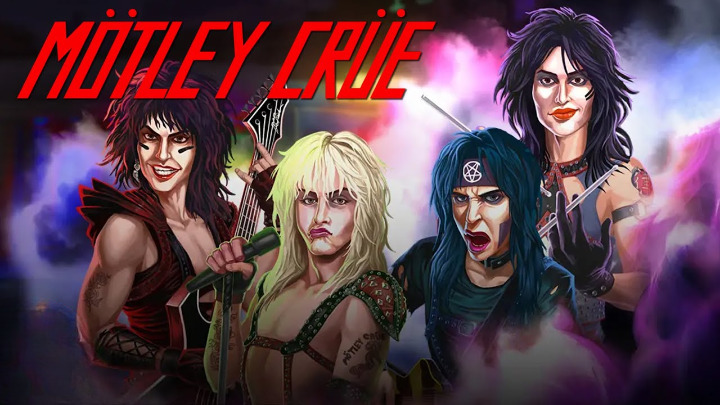 Play’n GO studio developed the Motley Crue slot, which has a rock theme, to lure lovers of the rock band member Motley Crue. The band, which wa,s formed in the 1980s, was famous for its rock’n’roll style, which enabled them to sell over 100 million albums. To keep the band’s memories alive, a producer did a biographical film, The Dirt, that became a best-selling autobiography. But as a slot, what does Motley Crue entail?

The developer of the Motley Crue slot used it to celebrate the band’s hedonistic lifestyle. It contains various videos of the band members in action, which revives the old days in the player’s mind. The base game happens at a biker bar/strip joint in some part of town, and it triggers free spins, which take players indoors.

The game becomes more interesting as the three songs of the band play in the background, which puts players in the right mood for the game. as the soundtrack plays neon graphics that create the night-out feeling that rock fans love appears in the grid.

Motley Crue takes place on a grid with five reels and four rows with 20 paylines. It’s a medium volatile slot that’s accessible on all devices. To play, one has to place a bet of 20 p/c to 100 euros per spin. After matching symbols, the winning combinations on this slot form land along the payline on consecutive reels from the left.

This slot also has various symbols. The low pay symbols are the J-A card royals worth 2.5 to 3x the bet. The high-pay symbols are mick mars, Vince Neil, Tommy Lee, and Nikki Sixx, worth 15 to 25x the stake for five of a kind. Remember the high-pay land in sizes 1×1 and 2×2. The wild symbols on this slot can appear on any reel. Moreover, their value is the same as Nikki Sixx, and they can substitute any paying symbol.

If 3 scatter symbols land on the 1st, 3rd, and 5th reels during the bonus round, they trigger free spins. A player can get 6 to 10 free spins. The live wire and Girls, Girls, Girls feature remains active during this round and deactivates when the wild side is active. The wild side can trigger on every winning spin.

When the wild side respins to the kickstart my heart can also trigger randomly during the free spins round. This can earn x2, x3, x5, or x10 multipliers depending on the position of the barrier.

Motley Crue is the right slot for go-getter players who are into rock music. It’s a fun and entertaining slot that lets players remember the good old days while attending the band’s performance on popular nights. It’s a slot with two types of women-the groupies and strippers which can discourage some players.

But those who don’t mind will have a good time bringing back the good old memories when guys did all they could to get girls’ attention. The soundtrack on this slot is also on point as it livens the player’s spirits. However, players must be keen when playing as the features can be confusing.

The players need to know that when the Girls, Girls, Girls is active wild side will not be in play. Moreover, when the wild side is active live wire will remain inactive and vice versa. But generally, Motley Crue is an excellent slot worth a try at any time.