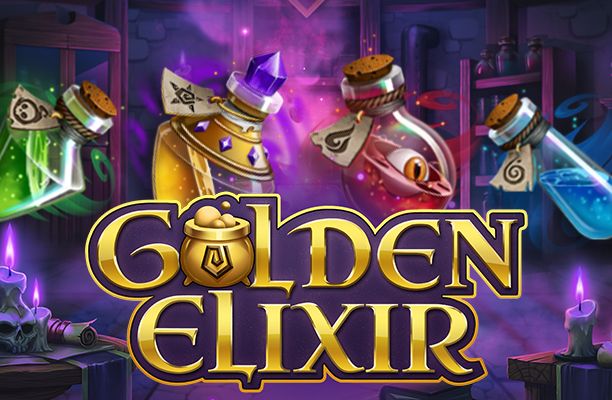 Microgaming’s (now Games Global) catalogue is enriched by its partners, and for the past several years, that’s been about the only way they’ve been able to create new slot machines. Golden Elixir is a magic-filled release from Half Pixel Studio, and it’s one of their most recent such games. It appears and plays like a lot of other games, but take a look inside because you might find something unique, perhaps in the features it offers.

Golden Elixir has a setup that has been increasingly popular over time, in which 243 ways to win manage to cover every conceivable win on the 5×3 reels. In a slot machine with a 96.19 percent RTP and medium volatility, a top jackpot of 2,400 times the bet is possible. Enchanted Wild Stacks, ordinary wilds, scatters, and up to 15 free spins are just a few of the important features to highlight.

In Golden Elixir, you can stake anywhere from $0.20 to $100, which is a wide enough range that almost everybody can find a value they like.

Filling all spots on the 5×3 reels with top-paying symbols is the simplest method to win the top jackpot. With each combination paying up to 10x the stake, a win of nearly 2,400x the stake is achievable. Wilds, both stacked and normal, will also aid, and they can be quite effective.

Golden Elixir has a medium level of volatility, which should allow a wide range of players to test it out. While the RTP is part of a range, the maximum number of 96.19 percent is impressive, and I’d play the slot if I came across it with this option enabled.

Features of the Golden Elixir Slot

Stacked wilds will also appear on the middle reels, which are numbered 2 through 4. From certain spots, they operate as substitutions, replacing regular symbols but not scatters.

Enchanted Wild Stacks is a random occurrence that can occur during paid plays but is guaranteed during free spins. When it does, super stacked wilds will appear on 1-3 of the three centre reels. This increases the likelihood of wilds taking over some or all slots on those reels.

The Free Spins scatters must occur on all three centre reels at the same time to trigger the free spins. Only during paid spins are these available. The scatters that activate the free spins will each reveal a number of rounds, with a total of 15 free spins available. Each free spin guarantees the Enchanted Wild Stacks.

Golden Elixir’s graphics aren’t out of the ordinary, on the contrary. It transports us to a wizard’s lair, complete with cauldrons in the background, skulls as candle holders, and a plethora of scrolls. Even with the usual choices chosen, it’s a good design.

The Golden Elixir symbol list begins with the number 10 and progresses to the letter A. Its premium emblems are representations of different-shaped and coloured potion bottles. The main feature symbols will be a W wild and a Free Spins scatter.

Golden Elixir delivers unique characteristics, and that’s basically the only component in which this slot distinguishes out. Even with the many common selections made elsewhere, it’s a good alternative for a casual or veteran player who doesn’t want their next game to be too volatile.