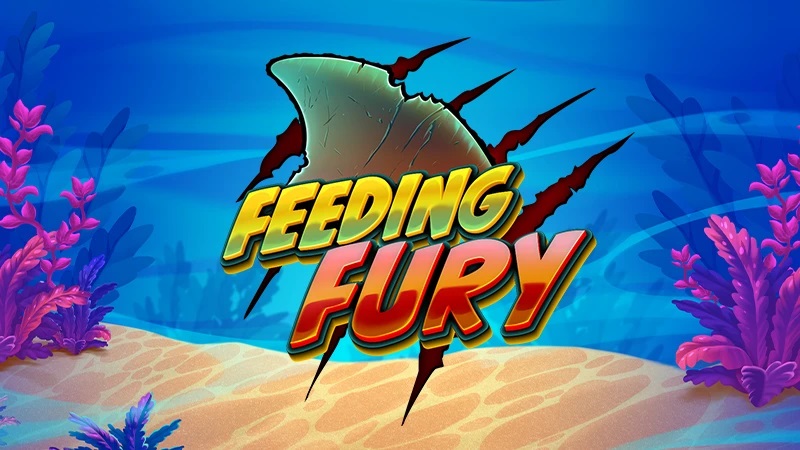 Iron Dog Studio just released an online slot game known as Feeding Fury, set in an underwater world and features various sea creatures. Despite its aquatic theme, the game does not involve fishing. Instead, it focuses on survival, with Shark Attacks occurring randomly during the base game and a Feed or Die bonus round featuring a collection element. The game has a humorous tone, and while it includes themes of violence and conflict, it is meant to be light-hearted and fun.

The Feeding Fury setting is underwater, with bubbles rising from the ocean floor and plants waving in the water. The game’s background is simple, showing a blue ocean with no land in sight. The cartoonish design of the fish on the reels adds a humorous touch to the game, and the Wild Western-style soundtrack enhances the theme.

It comes with a medium to high level of volatility and an average return to player rate of 96.11%. The game is played on a 5-reel, 3-row grid with ten fixed paylines. Players can place bets ranging from 10 cents to 50 Euros per spin on any device, including mobile and desktop.

In the base game of Feeding Fury, there is some degree of feeding, but the main action takes place in the Feed or Die bonus round. Players should also be on the lookout for the Shark Attack modifier.

Shark Attacks can occur randomly in the base game. During a SharkAttack, wild symbols move across the grid, consuming any fish in their path. If multiple wild symbols land on the same row and one wild pass over another, the multiplier for the existing wild is increased.

Feeding Fury logo scatters appear on all reels. Hitting three, four, or five of these symbols awards three, four, or five lives, respectively, in the Feed or Die feature. In the Feed or Die feature, there is a Collector Shark in the center of the game board that eats any fish that lands on it and awards a monetary value for each one. Fish do not have to be adjacent to the Collector Shark to be eaten. The Collector Shark cannot eat crab symbols; if there are no fish symbols on the board during a round, a life is lost. As fish are eaten, they contribute points to a collection system. When the correct number of issues is reached in a single spin, the round advances to the next level, of which there are three in total.

The Feed or Die feature continues until the player has lost their lives or the maximum win limit is reached.

Feeding Fury stands out among other fishing-themed slot games because it does not use angler symbols to collect prize-winning fish symbols, as is seen in games like Fishin’ Frenzy or the Big Bass/Bigger Bass series. Instead, it has an approach to gameplay that deviates from the traditional fishing theme, which adds to its originality.

Although Feeding Fury is a straightforward game, it is made interesting by the SharkAttack feature in the base game and the humorous way the fish are designed and animated by Iron Dog Studio. Despite being underwater creatures, the fish in Feeding Fury is full of personality. Overall, the game is simple to play and enjoyable to watch.

The Feed or Die round is active, and moving up to the second level is not too difficult. However, reaching the third level is more challenging. Advancing to higher levels has both advantages and drawbacks. On the positive side, the global multiplier increases, but on the negative side, the enormous Collector Shark on the grid takes up more space and eats fish from any position, not just those adjacent to it. This expansion adds to the challenge of achieving the maximum win of 5,434 times the bet.

Overall, Feeding Fury is an enjoyable game to play. It has a unique style and offers players interested in the ocean a different way to win compared to other slot games.