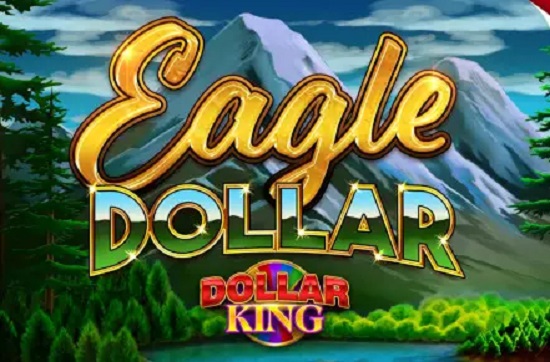 Although it may appear that way, there is no actual relationship between the two words in the game. While the Eagle informs us about the primary character and the game type (wildlife), the Dollar focuses on the Dollar King fixed jackpots, which are distributed by a Wheel of Fortune. Overall, Ainsworth has created a user friendly slot machine, and you can read more about it in our review.

On the 5×3 reels spinning in Eagle Dollar, you’ll have 20 paylines to choose from. The primary feature offers a 2,500x Grand Jackpot, and the RTP is a respectable 96.18 percent. The wild, scatters, the Wheel feature, and its multipliers are just a few of the elements I would like to mention. Even though the stakes are not particularly tiny, a victory of $11,250 appears to be the maximum that the game will go. Scatters, free spins, and wilds with multipliers are among the features, so that portion of the game looks promising.

You can choose your wager for the next spin, which will range from $1 to $50.

In exchange, the slot machine might pay up to 2,500 times the bet (Grand Jackpot combined with a 5x multiplier). If you only look at the standard combinations, they appear to be capable of paying up to 1,000 times the stake (50x the stake for each combo of wilds).

They claim that the long-term probabilities are favourable because the RTP is 96.18 percent.

The wild will be a significant symbol in Eagle Dollar. Eagle Wilds can appear anywhere on the reels, and they can even form combinations on their own if they line up perfectly. A combination of wilds can pay up to 50 times the stake (regulars pay up to 15x). These Eagle Wilds, on the other hand, will mostly act as substitutions for the ordinary symbols.

The Wheel is the major feature, and it can be accessed by matching two Dollar King symbols (reels 1 and 5) or combining them with multiplier scatters. If there was a multiplier scatter on the 5th reel at the moment, the value displayed on it will increase all rewards from the Wheel.

Eagle The concept of Dollar is a frequent one, and the images are based on North American nature. The Royals are depicted in the first six symbols, from 9 to A, while the next six feature representations of deer, an eagle’s nest, buffalo, wolf, rocks, and the Eagle in its natural state. Scatters include the Dollar King emblem and many multipliers.

Eagle Dollar Slot is an excellent slot with an interesting them and design. It has quite simple  interface which makes the players understand the game easily. Eagle Dollar could be a good fit if you do not mind a simple setup and a short list of functions. There is some possibility there, but you can obtain something comparable from other slots, so it’s not essential.