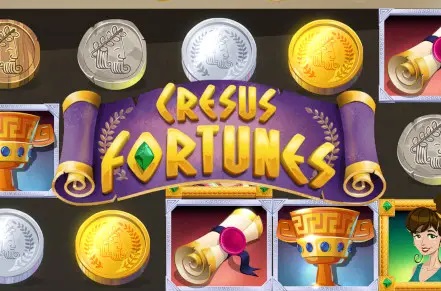 iSoftBet’s upcoming release, Cresus Fortunes, is a slot machine that takes inspiration from one of history’s wealthiest kings. While themes centered around wealth and riches are generally popular among players, it is not common for Cresus to be featured as the main character in a slot game.

In the slot game Cresus Fortunes, there are 5 reels with 3 rows each, and a total of 20 possible winning combinations. The game includes features such as free spins, multipliers, respins, and wild symbols. Players have the potential to win up to 1,250 times their original bet during the main feature of the game, and the return to player percentage (RTP) is 96%.

The Temple Wild is a special symbol in Cresus Fortunes that can be used to replace any other regular symbol in the game. This is one of the more basic features of the game.

In the Gem Link Respins feature of iSoftBet, players must collect at least 5 diamonds, which are represented by money symbols, in order to trigger the respins round. This feature is similar to a Hold & Win style game. The goal is to land as many of these diamonds as possible in order to win prizes.

At the beginning of the game, you have 3 respins. If more Diamond symbols appear on the reels and become sticky, the number of respins is reset. It is possible to obtain Reel Boosters by collecting three of the same type. These Reel Boosters can increase the size of the reels (up to a maximum of 5×6 reels), increase the value of the prizes, give you extra respins, or increase the multipliers.

The game is based on a story about a wealthy king from Ancient Greece and features symbols that depict the king smiling and his wife, cups, scrolls with seals, and four coins with varying values ranging from wood to gold. The design quality is highly praised and the game has been well received.

In summary, the Cresus Fortunes slot game is satisfactory, but it doesn’t offer anything particularly unique. The theme and graphics are fine, but the respins feature is not especially innovative, even with the additional modifiers that are included.