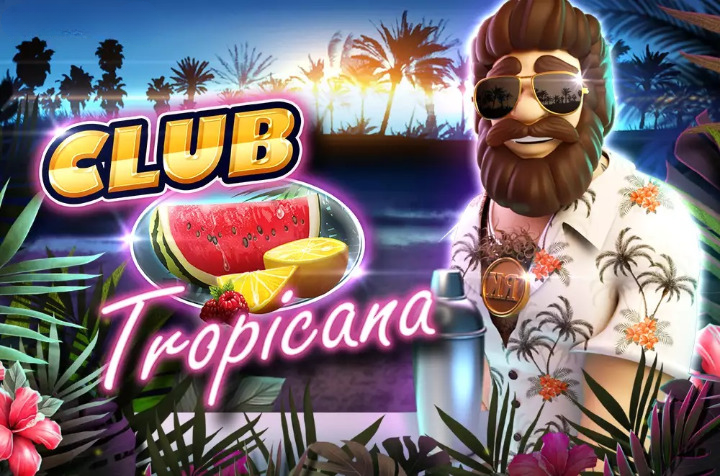 Club Tropicana is a term that has been used in various contexts, including as the name of a hotel, clubs, and a song by Wham! It is also the title of an online slot game developed by Pragmatic Play and Reel Kingdom. While the title may suggest an upbeat and energetic atmosphere, the gameplay of Club Tropicana is based on the clone of Bigger Bass Blizzard, featuring features such as money symbol collections and free spins with collected wilds that lead to money multipliers. Despite the lack of originality in gameplay, the association with the phrase “Club Tropicana” may still evoke a sense of fun and excitement for players.

In Club Tropicana, a man with a beard and sunglasses appears as the bartender. He can be seen shaking cocktails on the side of the screen while the top portion of the grid displays a line of black silhouetted palm trees. The background features waving foliage, and a swinging soundtrack accompanies the game. While the theme of Club Tropicana is different from that of Big Bass, it still feels like a relative of the last game due to the presence of the bearded man and the overall atmosphere. It could be argued that the connection between the two games is psychological, as the bearded man has appeared in numerous Bass-related slots. It is unclear if he has a name, but he has become familiar with these games.

Club Tropicana is a clone of Bigger Bass Blizzard, with the same statistics and features. The game has a high level of volatility, rated 5 out of 5, and an RTP of 96.08% when played commonly or with the Ante Bet activated. When buying free spins, the RTP drops slightly to 96.07%. The bet levels for Club Tropicana start at 12 p/c per spin and go up to £/€240. Activating the Ante Bet, which adds more scatter symbols to the game, increases the cost by 50%.

Club Tropicana is a game that can be played on any device and features a 5×4 grid with 12 fixed paylines. Regular symbols in the game payout from left to right, starting on the first reel, and include low-paying symbols such as cherries, lemons, oranges, plums, and watermelons, as well as high-paying symbols like a pool ring, cocktails, cocktail umbrellas, and a pouring drink. Landing a five-of-a-kind combination of low-paying symbols will award players 10x their bet, while a five-of-a-kind combination of high-paying symbols will pay out between 50 and 200. The game also includes Money symbols that can land with values ranging from 2x to 4,000x the bet. If a line of five Money symbols is hit, the total value of all the symbols will be paid out to the player.

In Club Tropicana, players can purchase free spins for 100x the bet, if available. When a player buys a triggering spin, there is a chance that three, four, or five scatter symbols may land, awarding the player with free spins.

Club Tropicana is a game developed by Reel Kingdom and Pragmatic Play closely related to the Big/Bigger Bass franchise. If you enjoy playing these games, you are likely to enjoy Club Tropicana as well, as it is essentially a direct port of Bigger Bass Blizzard. On the other hand, if you are tired of the Bass theme, you may want to avoid Club Tropicana, as it plays out similarly to the other games in the franchise.

The Big/Bigger Bass franchise has been top-rated among online slot players since the release of Big Bass Bonanza in late 2020. Despite feeling similar to the game Fishin’ Frenzy, Big Bass Bonanza was a surprise hit and spawned several follow-up games, including Club Tropicana. Club Tropicana is essentially a repeat of the original game, with no updates to the mechanics or numbers, including the 4,000x win cap. Player fans of the Bass theme will know precisely what to expect if they play Club Tropicana, as it is similar to the other games in the franchise.

Since the Big/Bigger Bass slots franchise is so widespread, many players are likely already familiar with the gameplay. However, for those new to these types of games, it is worth noting that Pragmatic Play and Reel Kingdom’s contributions to the Fishin’ Frenzy genre, including Club Tropicana, are considered some of the best games of this type. As Club Tropicana does not introduce any new elements, players who enjoy collecting Money symbols will have the opportunity to enjoy another Bass-themed party. At the same time, those who are tired of this type of game may want to opt out.